Auto-enrolment review 2017: 5 steps to avoid snatching defeat from the jaws of victory

December will see the DWP announce the terms of reference for the inaugural review of auto-enrolment. Hargreaves Lansdown sets out its Future Proofed Five – 5 key changes that should be adopted to ensure auto-enrolment keeps on rolling.

"The auto-enrolment review must home in on two key areas; get more people saving and get them more interested in their savings.

Dropping the level of earnings needed before being put into a pension will ensure more part-time workers are included, whilst including the self-employed will help the 4.2 million who are currently sat on the sidelines without an employer. Auto-enrolment of the self-employed can happen through the roll out of HMRC’s digital tax accounts and will allow tax and pension contributions to be collected at the same time. Contributions should then be paid to NEST by default.

The success of saving for retirement is inextricably linked to high levels of engagement. Allowing both employed and self-employed pension savers to have their auto-enrolment contributions paid into their own pension if they prefer will help people take complete control of their retirement.

Whilst contribution levels need to increase, making decisions before the scheduled uplifts in April 2018 and 2019 could be catastrophic. The opt-out behaviour of pension savers at these two points could give rise to a completely different direction for legislation."

The current earnings trigger of £10,000 needs to be revised downward. Doing so will include more part-time workers. Since part-time workers are more likely to be women this helps to eliminate an element of unintended discrimination that exists.

Pension contributions should accrue from the first pound earned

Hargreaves Lansdown estimate 90% of employers will be using Qualifying Earnings by the time it is fully rolled out. Rather than increase contributions to a higher level now, simply removing this quirk that prevents contributions on the first £5,824 would go a long way to boosting pension contributions.

The below chart shows the increase in overall pot size by allowing contributions on the first pound earned based on different levels of earnings. It is the lower paid who will benefit most from this change. 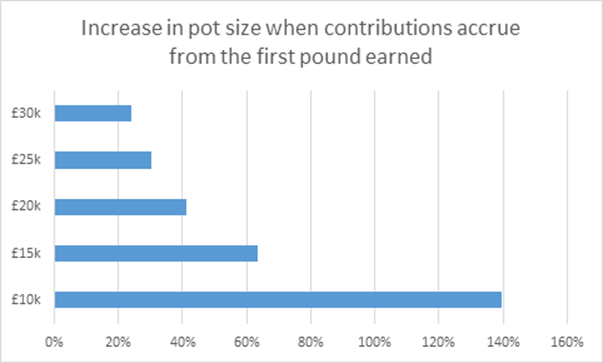 It is universally recognised that the amounts required under auto-enrolment are not sufficient to provide for life after work.

Hargreaves Lansdown use a rule of thumb that 15% contributions over a working life (starting at age 22 finishing at 68) should put most people in the right ballpark, but of course everyone has their own needs.

We caution against immediately increasing the required minimum contributions beyond those occurring in 2018 and 2019. Making decisions prior to analysing the impact of these increases would be premature. We expect the decisions about contributions would be considerably different if the 8% contributions required in 2019 forced a 50% opt out rate as opposed to if it remains around the 10% mark. Employers who opted for entry points above the AE minimum have had higher opt-out rates than others suggesting affordability is an issue.

Ensure the self-employed are also saving for retirement. Auto-enrolment via new digital tax accounts with contributions collected and paid to NEST as default.

By definition, the self-employed can’t be auto-enrolled into a workplace pension. We believe the time has come for the government to take the bold step of utilising the tax system to automatically collect contributions from the 4.76 million self-employed workers and to pay those contributions into a private pension for them. We propose using NEST as a default but giving the self-employed the option to choose an alternative scheme if they desire. This solution could work using the same infrastructure built to support member choice with their auto-enrolment contributions.

The self-employed should also be given the choice to opt out, but only via the pension scheme and only after they have been defaulted into a pension to start with.

Provide both the self-employed and employed with choice as to where their auto-enrolment contributions are paid.

The existing auto-enrolment system could be modified, retaining the key advantages of the current system and adapting it to meet the engagement needs of the post pension-freedom world.

When commencing a new employment, in addition to obtaining the usual personal data from the employee, such as name, address, date of birth, NINO, bank details etc, the employer would ask the new employee whether they had an existing pension arrangement to which they would like to have contributions paid.

However, for employees who have a pension already and who wish to continue that relationship with their existing pension provider, the employer would be required to take the details of that pension and to make the relevant employer and employee contributions into that pension, as directed by the employee. Similarly, if an employee decided after joining an employer that they wished to exercise choice and to have their contributions redirected to a new scheme, they should be given the opportunity to do so.