5th July 2017 marks the ten year anniversary of the last time there was an interest rate rise in the UK.

On that date in 2007, the Monetary Policy Committee voted to increase rates to 5.75%, just as the wheels were about to come off the global economy. A decade on from the last interest rise, the Bank of England is once again mulling a rate hike, though the current level of consumer debt leaves the central bank facing a tightrope walk on interest rate policy.

‘It’s been a decade since the last interest rate rise, so it’s little wonder that borrowers have got used to the idea of cheap money. Indeed around 8 million Britons haven’t witnessed an interest rate rise from the Bank of England in their adult lives.

Low interest rates undoubtedly helped to prop up the economy in the wake of the financial crisis, by lowering the cost of debt for UK consumers and companies. However the burden of loose monetary policy has very much fallen on those with cash in the bank, who have seen the interest they receive wither away to virtually nothing.

Meanwhile the UK consumer has even more borrowing now than ten years ago, thanks to weak wage growth and the addictive nature of low interest rates. Rising house prices and the increased cost of a university education mean that the current generation of young adults are particularly accustomed to eye-watering amounts of debt.

There has been a sharp rise in consumer borrowing over the last year, and current conditions of weak wage growth coupled with rising inflation are likely to exacerbate the use of credit to fund living expenses. Indeed the savings ratio has now fallen to a record low, highlighting the squeeze currently facing UK consumers.

The fragile debt dynamics of the UK economy put the Bank of England in a bind, because while a rate hike would help to curb consumer borrowing, it will also make the existing debt mountain less affordable. The central bank therefore faces a tightrope walk between keeping borrowing levels in check, without putting too big a dent in consumer activity, which would have a damaging effect on the UK economy.

The Monetary Policy Committee has turned more hawkish recently, and expectations of a rate rise have built up considerably in recent weeks. However the large amount of consumer debt means that even when the Bank of England does finally decide to wean the UK off low interest rates, it will be a very slow and steady process.’

The cost for cash savers

Those with cash in the bank have now seen a decade of falling returns. £1,000 stashed in a typical instant access account in July 2007 would now be worth £1,107. However after factoring in inflation, which has risen 26% over the period, the real value would today be £878. By comparison the same £1,000 investment in the UK stock market in July 2007 would now be worth £1,666, or £1,323 after adjusting for inflation. (Returns calculated with interest and dividends re-invested).

This is a pretty astonishing result, seeing as this investment would have been made just as the UK stock market was about to fall by almost 50% as a result of the financial crisis. These figures highlight the healing power of time on stock market returns, even if you happen to be unlucky enough to invest just as conditions take a turn for the worse. The figures also demonstrate the toll taken on cash in the bank by such an extended period of low interest rates.

Indeed, over the last ten years the amount of money held in non-interest bearing accounts has risen almost eightfold, from £23 billion in 2007 to £179 billion today. At the same time the average rate on the typical instant access account has fallen from 3.3% to 0.4%, and the average rate on non-instant access accounts (including cash ISAs) has fallen from 5% to 0.9%.

The benefit for borrowers

While cash savers have undoubtedly felt the pinch from lower interest rates, there have been benefits for borrowers which have helped support the economy. The typical mortgage rate has fallen from 5.8% in July 2007 to 2.6% today, helping to support household incomes and the housing market in the wake of the financial crisis. Unsecured consumer borrowing rates have fallen too. The result is much lower levels of consumer loan defaults. UK lenders have written off £2.5 billion of bad consumer loans over the last year, this compares to £6.8 billion in 2007.

Borrowing costs have also fallen for UK companies. The typical borrowing cost for a large company with a good credit rating has fallen from 6.4% in July 2007 to 2.8% now. This has allowed companies to gain access to funds cheaply, thereby supporting them in making investments and profits, and providing employment.

Low interest rates have therefore helped the economy by reducing the burden on UK consumers and companies. However it seems consumers are now increasingly taking advantage of low interest rates to load up on debt, which is causing concern at the Bank of England. Only last week the ONS published data which showed that the UK savings ratio has fallen to a record level of 1.7%, which suggests the consumer squeeze is beginning to hit home.

The Bank of England recently warned that consumer credit and mortgage lending were a key risk to financial stability in the UK. This is because there has been a rapid increase in consumer credit of late, which rose 10% over the last year. As a result the central bank is bringing forward an assessment of the banking sector’s exposure to potential losses stemming from stressed conditions in the consumer credit market.

In absolute terms, levels of UK consumer debt are actually higher now than they were on the eve of the financial crisis, a point in history when it is widely recognised that the UK was living beyond its means. Consumer borrowing (including credit cards, overdrafts and loans) now stands at £199 billion, compared with £191 billion in July 2007, and a highest ever level of £209 billion recorded in September 2008. Mortgage borrowing now stands at £1.3 trillion, up from £1.1 trillion in July 2007.

The good news is household income has also risen over this period, which along with low interest rates make this debt more affordable. In 2007, the household debt to disposable income ratio peaked at 159.7%. This fell back in the years following the financial crisis as consumers tightened their belts and banks became more reluctant to lend. However it has recently started to head in the wrong direction again, rising from 139.9% in 2015 to 142.6% in 2016.

The Brexit-induced currency crunch facing consumers at the moment can be expected to put further upward pressure on this ratio. With wage growth weak and inflation rising, consumers are more likely to rely on debt, while their disposable household income is likely to come under pressure. Indeed in its latest forecasts the Office for Budget Responsibility predicts this ratio will hit 153% in 2022.

The Bank of England bind

This all underlines the very difficult situation the Bank of England finds itself in. Raising rates will help to wean investors off borrowing, however it will also make the large existing stock of debt more expensive, which will eat into monthly budgets, putting downward pressure on spending and weighing on economic growth.

This is perhaps why the bank has so far chosen to use more specialised tools to deal with the sharp rise in consumer credit, such as tightening up mortgage lending rules and increasing bank capital requirements to deal with any downturn in credit conditions, rather than wielding the sledgehammer of an interest rate rise.

However, more members of the monetary policy committee appear to be in favour of a rate rise, which may mean we could soon be in for the first hike since 2007. Markets are now pricing in a 55% chance of a rate rise by the end of the year. However the fragile debt dynamics of the UK economy mean that even when the Bank does decide to raise rates, it’s going to tread very carefully indeed.

It’s also worth pointing out that this wouldn’t be the first time that expectations of a rate hike have risen only to be subsequently quashed. At the beginning of 2011, two years after rates had been cut to the emergency level of 0.5%, the market was expecting interest rates to be at 3% by 2014.

The stock market fell sharply in 2007 and 2008, but has since staged a significant recovery, while cash has been left in the doldrums:

Consumer credit fell in the wake of the financial crisis, but has started to pick up again and is approaching a record level; weak wage growth and rising inflation are likely to stoke the borrowing binge further: 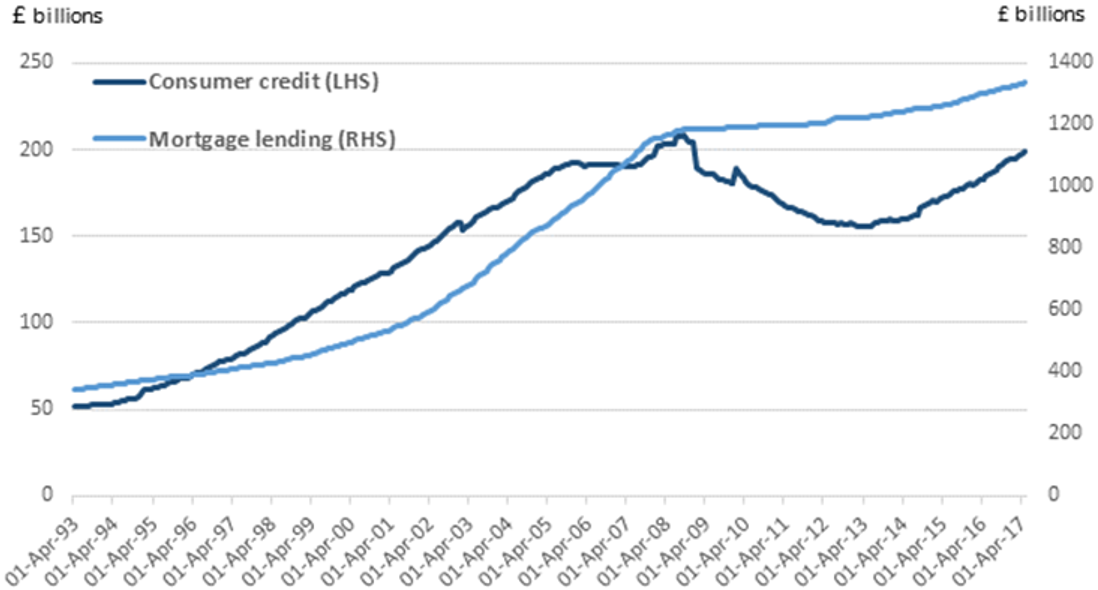 Low interest rates have helpd the economy in a number of ways, not least by making mortgage payments more affordable, which has helped to underpin the housing market: 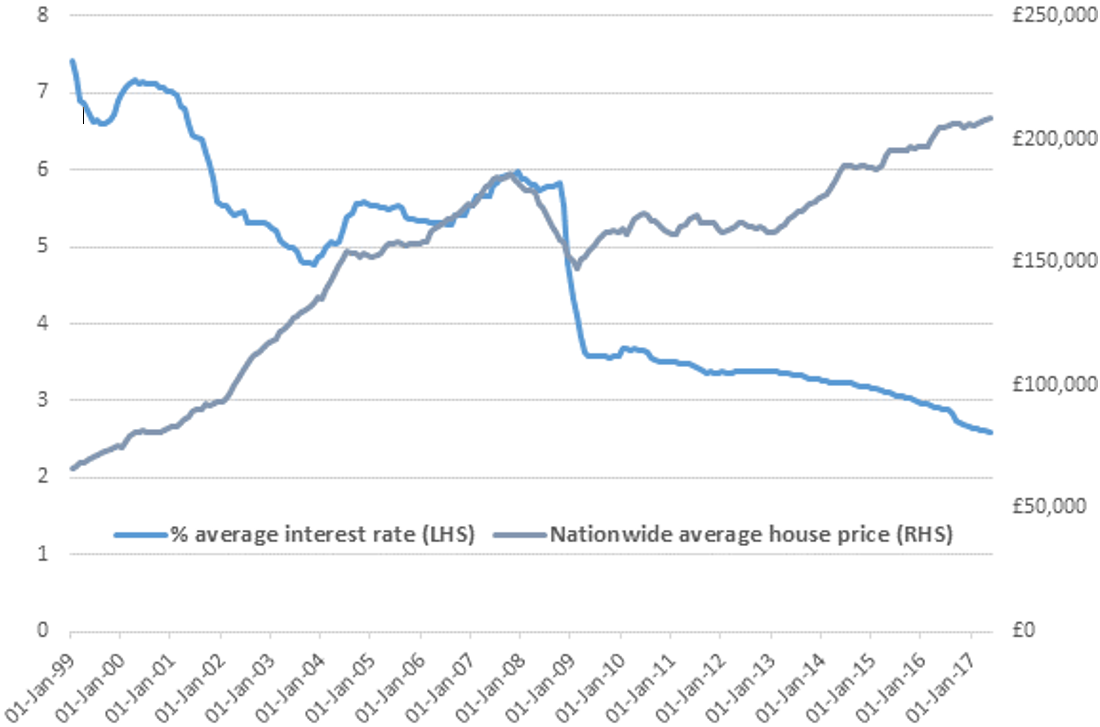