There is no shortage of negative information concerning the current state of the global economy. However, Avinash Vazirani, manager of the Jupiter India Fund, believes India is largely immune to the woes affecting the rest of the world; India is not overly reliant on trade with China, a potential Brexit will have little impact, and the country benefitted from last year's collapse in commodity prices as it imports the majority of its energy.

A number of factors which could boost India's growth are also being overlooked. The first, and perhaps most significant, is the greater proportion of the population with bank accounts - 225 million new accounts have been opened since September 2014. These are linked to the government welfare system and make it easier for individuals to manage their money and for the government to control and collect taxes. Benefits such as fuel allowances are paid directly to the intended recipient, which also reduces corruption.

Elsewhere, wages have increased substantially, with annual rises of up to 22% in some states. This has increased consumer spending power, which has fuelled growth in smart phone sales and internet usage.

Another contributor to India's growth is in the hands of Mother Nature - the weather. The region has suffered poor monsoons for the past 2 years, which had a negative impact on the 70% of the population dependent on agriculture. Forecasts for this year are good and a strong bout of rains is anticipated. As the agriculture sector accounts for more than 15% of India's economy, this would provide a boost to economic growth.

Avinash Vazirani has invested primarily in domestically-focussed businesses over those whose fortunes are driven by external affairs. This includes consumer goods companies such as Proctor & Gamble, which is benefitting from 15% annual growth in sales of women's hygiene products; Indigo, India's largest domestic air carrier; and HBCL, a petrol and diesel retailer, which is benefitting from huge growth in car ownership. Elsewhere, he has avoided the technology, oil & gas, and mining sectors as he has struggled to identify attractive opportunities in these areas.

Avinash Vazirani has a successful long-term track record, delivering growth of 89.4% since the fund's launch in February 2008, compared to 33.2%* for the FTSE India Index. However, it has not been smooth sailing as the FTSE India Index has been volatile over this time. Past performance is not a guide to the future.

The years prior to Narendra Modi's election as Prime Minister of India in May 2014 were lacklustre; however the stock market reacted positively to his appointment and share prices, particularly those of domestically-focussed small and medium-sized companies, rose strongly over the following year. As this is where the fund is biased, it comfortably outperformed the index over this time, although investing in smaller companies is a higher-risk approach.

This strong performance continued for the majority of 2015 but faltered in the lead up to February's Budget announcement. However, the market bounced on what turned out to be a positive budget for the Indian economy. Assurance that the government's borrowing target would remain the same, despite higher state salaries and pensions, is particularly positive as it makes a cut in interest rates more likely, which would boost the economy, in Avinash Vazirani's view.

Our analysis suggests the fund's returns are primarily led by the manager's skill as a stock picker and we remain confident in his ability to capture any future stock market rises. Whilst we feel there is ample opportunity in India, it remains a specialist area and should therefore only be considered by investors willing to shoulder more risk. 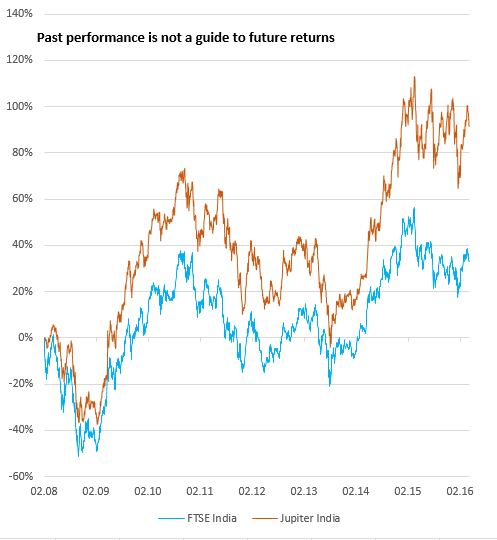 Want our latest research sent direct to your inbox?

Kate Marshall
Find out more and invest in a new account: