Simon Somerville has announced his intention to leave Jupiter and Dan Carter has taken over as manager of the Jupiter Japan Income Fund, having previously been Deputy Manager.

Dan Carter joined Jupiter in 2008 as an analyst on the Far Eastern Equities team and has worked closely with Simon Somerville since. In addition to his role as Deputy Manager on the Jupiter Japan Income Fund he has managed the JGF Jupiter Japan Select Fund since October 2013, having also been Deputy Manager on that fund for the two previous years.

No material changes to the Jupiter Japan Income Fund are anticipated. Dan Carter and Simon Somerville have a similar investment approach. Both look for cash-generative companies with a competitive advantage and growth prospects which are not being recognised by other investors. The portfolio is concentrated, which allows each investment to have a significant impact on performance, but this is a higher risk approach. 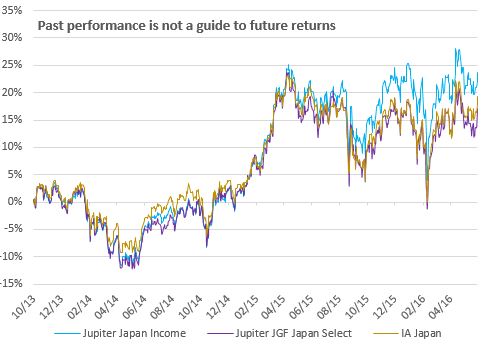 The bulk of the disparity in performance was caused by two individual stocks. The most meaningful was Nomura Co. which was held in Jupiter Japan Income, but not JGF Jupiter Japan Select. It subsequently performed well, to the advantage of the former and disadvantage of the latter. Similarly, Dan Carter invested in Rakuten in the Select fund and the company went on to perform poorly. However, Simon Somerville did not invest in the company, which benefited his fund.

Dan Carter has a total of 12 years' experience analysing Japanese equities. However, his fund management track record is relatively short and in light of this we feel it is prudent to remove the fund from the Wealth 150 which is reserved for the fund managers we believe have the best prospects.

Please note the fund's charges can be taken from capital which can increase the yield but reduces the potential for capital growth.