We look at how the predictions for the pound against the euro and dollar from a group of investment experts have panned out against reality so far this year. Plus a look at what’s ahead in the next six months.

In December 2018 we published our Sterling Outlook report. As part of this, we surveyed a range of investment experts to get their thoughts and predictions on the year ahead. We also asked them where they expected exchange rates to be at the middle of the year.

So what’s behind these movements?

Brexit in the driving seat

Brexit has been the most influential force on the pound over the last couple of years, and 2019 has been no different. After a slow start to negotiations, the first six months of the year have seen developments come thick and fast.

Theresa May’s first attempt at getting her withdrawal bill through the Commons resulted in a record defeat, by 432 votes to 202. The Prime Minister would later make a further two attempts before resigning as leader of the Conservatives on 7 June.

Meanwhile the European Central Bank has pledged to keep interest rates at historic lows until 2020, along with a new bout of bond buying aiming to kick start a flagging economy.

Over in the US, a big talking point has been the Federal Reserve’s (Fed) change in outlook for future interest rates. US rates rose four times in 2018 and many were expecting more heading into 2019. But the Fed chair, Jerome Powell, has since hinted at an openness to cut rates if needed. And Donald Trump has been vocal in his desire for lower interest rates to boost business growth.

In our mid-year report, we dive into the detail of what’s been moving the currency markets so far this year. By downloading this report, you’ll discover: 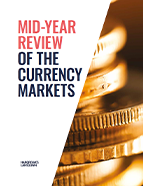 You could save time and money with our currency service. You could benefit from:

Fixing an exchange rate with a forward contract can reduce the risk of exchange rates moving against you, but you won’t benefit if they move in your favour.

See how we can help

The Hargreaves Lansdown Currency Service is a trading name of Hargreaves Lansdown Asset Management Limited, which is a wholly owned subsidiary of Hargreaves Lansdown Plc, One College Square South, Anchor Road, Bristol, BS1 5HL. Company Registered in England & Wales No. 1896481. It is authorised by the Financial Conduct Authority (FCA) as a Payment Institution under the Payment Services Regulations 2017. The Firm Reference number is 115248. The marketing of the currency service is not regulated by the FCA. June 2019.

How to save for the unexpected

How to get better returns on your savings, and get a £25 bonus

Are you and your partner on track for a happy retirement?

Warren Buffett is probably the world’s most famous investor. We look at a few ways you could follow his principles to help grow your own wealth.

How to save for the unexpected

We look at why everyone should have an emergency pot of cash, and how to get a £25 bonus towards starting yours.

Inflation’s dropped from 1.5% in March to 0.8% last month (ONS). Is it time to lock in on those inflation-busting interest rates?

How to get better returns on your savings, and get a £25 bonus

How Active Savings can help get your savings working harder, plus how you can receive a £25 bonus as a thank you (terms apply).