Investors will be wondering what the forthcoming election will mean for the UK stock market. Questions around public spending, the national deficit, and our membership of the European Union could have implications for the UK economy. But this is not the first time the UK has faced significant issues as it enters an election year, and history tells us stock markets are often driven by other factors.

If we think of the election year as starting six months before the vote, and ending six months after, the UK market has risen in five of the last six such periods, though there have been ups and downs along the way.

Margaret Thatcher won her third term in office in June 1987 with a comfortable majority. Over the election year (six months before, and six months after the vote) the market returned 5.4%. However there was a 30% market fall during this period. This huge market movement had nothing to do with the election though; it was the 1987 stock market crash, which began in the US and spread across global markets.

In 1992 there was a good deal of volatility in the run up to and aftermath of John Major's election victory. The major market story of the year was Britain's exit from the European Exchange Rate Mechanism, as the pound came under sustained pressure. Major's newly elected Conservative government were forced into this decision; they were left no choice by movements in the currency market. Despite the turbulence the UK stock market returned 1.2% over the election year.

May 1997 saw Tony Blair's reign as Prime Minister begin. It was also a fantastic time for the UK stock market, which returned 21.8% over the election year. Before you conclude this was down to some sort of 'Blair effect', consider the fact US and European markets returned even more, as stock prices enjoyed considerable gains across the developed Western world. 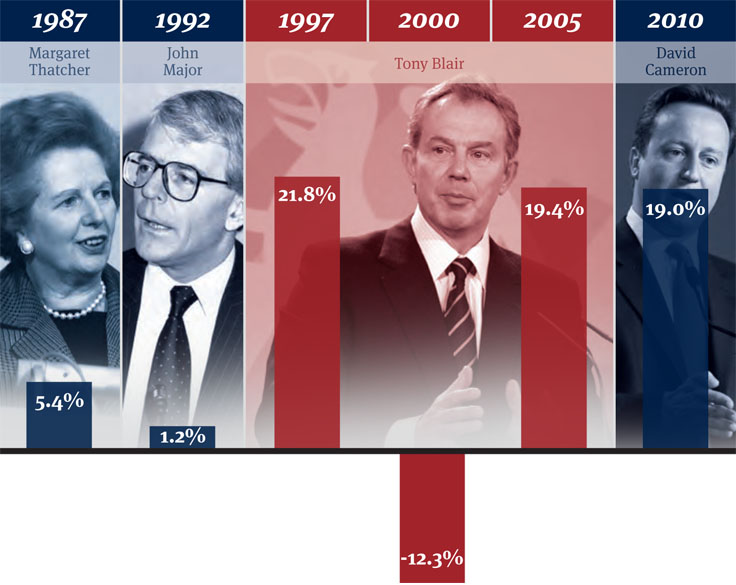 Tony Blair won again in the June 2001 ballot. This was the one election year out of the last six when the UK market fell, returning -12.3%. Again, this had little to do with UK politics. The market was already reeling from the effects of the tech bubble crash when the terrible events of 9/11 sent stocks spiralling down even further.

The next election was in May 2005, and Tony Blair won once again. The FTSE All Share had another strong period, returning 19.4% over the election year. This time the rally was driven by stock prices reacting to a rapid expansion in company profits.

That brings us up to the last election in May 2010 and the current Coalition government. The election year was again very positive, returning 19.0%, though there was significant volatility. The twists and turns were largely due to global events, in particular the eurozone crisis, the BP oil spill, and finally QE2 in the US.

This all suggests that while the UK election is of course significant, the UK stock market tends to be driven by more global events. This makes sense when you consider around two thirds of the revenues of FTSE 100 stocks come from overseas. Second guessing which way the election is going to go, and what effect this will have on the UK stock market will probably therefore prove unrewarding for investors, although any uncertainty could result in short term volatility. Instead it is better to focus on the long term when it comes to investing. Chances are, when we look back on market performance in 2015, it won't be just the election we are talking about.