Everybody makes mistakes in life, and pensions are no exception. The only difference is you could pay much more – and over a longer time – for pension mistakes than for most others.

Everybody makes mistakes in life, and pensions are no exception. The only difference is you could pay much more – and over a longer time - for pension mistakes than for most others.

The younger you are today, the longer you're expected to live, the more pension mistakes could cost you.

So what are the 10 most common and costly pension mistakes?

Almost four in ten British adults don't have a pension, including 1.4 million who are within a decade of retiring. How do you know if you're saving enough? People want on average £24,300 a year to live comfortably when they retire. Yet in 2010/11 the average male pensioner had a pension income of £319 a week or £16,600 a year, according to the Office for National Statistics. That's a gap of nearly £8,000.

Is your pension on track? Discover the retirement income you could receive and how much you should consider saving to meet your target. Plus, what impact do inflation and charges have on your pension?

Quite simply, the longer you delay, the more it costs you to build a good-sized pension. This is because of 'compound interest', which Albert Einstein called "the most powerful force in the universe". How much could delaying cost you?

Let's assume you pay £125 a month into a pension until age 65 and the fund grows 5.5% a year after charges. What's the difference if you start contributing at age 20, 30, 40 or 50? Roughly speaking, every ten-year delay could reduce your fund's potential growth by half.

The table below shows the figures. Of course, these are just projections; the actual return could be less or more than this. The figures show the values in today's terms, without considering inflation, which will reduce the spending power of money over time. Moreover investments are not guaranteed: they can go down as well as up in value so you could end up with less than you invested.

Everything being equal, the earlier you start saving, the more potential your pension fund has to grow.

The longer you delay, the more it costs you to build a decent pension 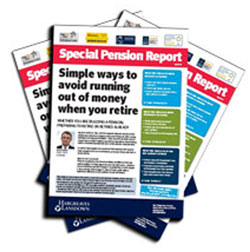 3. Not checking your pension pot

If you have a pension, have you ever reviewed it? Millions of people haven't.

Why is that alarming?

Performance can vary quite dramatically across investments and even a seemingly small difference could have a significant impact on the size of your pot.

Again, these are just projections. Investments will not always go up in value, they also go down, so you could get back less than you invested; what is certain is that they won't perform as predicted. Also, these values are in today's terms, without considering inflation, which will reduce the spending power of your money over time, i.e. by the time you retire, with a £10,000 annual income you will be able to buy much less than you can buy today with the same amount.

Top 10 tips to make your pension work harder for you

What do you need to watch out for? What simple steps could you take to improve your pension?

4. Not checking if you're getting good value for money

Most people know how much they pay for their mobile phone, but not for their pension. Nor do they know what they are paying for. The charges you pay typically buy you the services of your pension provider and the expertise of a fund manager who looks after your investments. In addition, some people employ a financial adviser to make recommendations. The charge for this advice is usually either paid separately or added to the pension charges. The services you get from your pension provider vary in depth and quality. Things you might (or might not) get include:

As the saying goes: an Englishman's home is his castle. But it may also be his largest investment. If you decide to just use property as a retirement fund, you could be putting all your eggs in one basket. Investment professionals agree diversification is key to managing risk, although it doesn't guarantee against loss. So, if you already have capital invested in property, doesn't it make sense to consider diversifying and investing in different asset classes? What's more, the property market isn't exactly "safe as houses" - as people who had to sell their home in 2008 and 2009 will testify.

A quarter of Britons rely on inheritance to fund their retirement but many could find their plans are resting on shaky foundations. Why is that? Common sense highlights the first problem with inheritances: you can't be sure when you'll benefit from the windfall. The way life expectancy is shaping up, older generations are likely to live well into their retirement years.

Moreover, the amount you end up inheriting may be far less than you expect. One in three women and one in five men aged 65 and over will need to go into a residential care home, according to Department of Health estimates. A single room in a private nursing home now costs £36,000 a year on average.

7. Not taking up employer contributions

Companies, especially the large ones, usually offer workplace pensions. In many cases, they also offer to pay money into your pension. The good news is that by 2018 all companies in the UK will have to offer a pension to their employees. The bad news is that most private sector workers aren't currently saving into a workplace pension. This means they could be missing out on "free money".

8. Assuming the state will provide for you

One in five people who retired last year will rely entirely on the state pension for their income. This is worrying when you consider 83% of 25 to 54 year olds don't know the value of their state pension and more than 30% overestimate how much they'll get. For 2013/2014 the basic state pension will pay up to £110.15 a week. There is a proposal to replace the present system with a flat rate of £140 a week (in today's money). Would that be enough to fund the retirement you want?

9. Not using pensions to save tax

Tax relief on pension contributions is one of those rare occasions when the taxman gives you something back. It cost the government £35 billion in just one year (2010/11). This is because under current rules when you pay money into a pension, the government effectively pays 20% of the total contribution (subject to maximum limits). If you pay a higher rate of tax, the government could in effect contribute 40% or even 45% in total. This means £20,000 in your pension could effectively cost you as little as £11,000. Although the value of any relief will depend on your individual circumstances and tax rules can change.

Baffled by pension tax rules? This short free guide to pension tax relief tells you what you need to know in plain English.

10. Not shopping around when you retire

Even if you manage to avoid the mistakes above until the day you retire, there's one last pitfall to watch out for.

When you retire, you can usually take up to 25% of your pension as tax-free cash. After that, most people will take a taxable income from their pension. They usually do so by buying something called an "annuity", although this isn't the only option available.

An annuity provides a secure income for at least the rest of your life in return for your pension fund. If you have a pension with an insurance company, they'll offer you an income, based on their own annuity rate. The vast majority of people take that option. This, however, could be a very costly mistake - and one you cannot rectify: once you buy an annuity, you cannot change your mind.

Annuity rates can vary significantly, depending on the provider you choose. What's more, there are over 1,500 medical and lifestyle conditions that could help you increase your annuity income. You don't have to be seriously ill to qualify, you just need to request an 'enhanced annuity', you could get thousands of pounds more every year for the rest of your life.

NEW! You can find out online in minutes with the UK's first live enhanced annuity quote engine. Get your free quote now