Why Buffett, Soros and Shiller are investing in Europe

Ben Brettell looks at why the world's expert investors are eyeing bargains in Europe's stock markets.

George Soros, the man who famously 'broke the Bank of England' by betting against sterling in the early 1990s, has been selling US holdings to buy European stocks. Soros, who has a net worth of $26bn, is said to have shifted around $2bn into holdings in Europe and Asia.

Meanwhile, Nobel prize-winning economist Robert Shiller, who first popularised the cyclically adjusted price-to-earnings ratio valuation measure described below, has also been eyeing Europe. "I'm thinking of getting out of the United States somewhat. Europe is so much cheaper," Shiller said in a television appearance last week. He particularly favours the beleaguered markets of Italy and Spain.

Legendary investor Warren Buffett is also turning to Europe – targeting smaller companies in Western Europe for potential acquisition. His firm, Berkshire Hathaway, has around $60bn in cash, and he would now like to spend $40bn of it on investment 'bargains' where he will obtain the most value.

Why professional investors are backing Europe

Depressed valuations often spell opportunity for the more adventurous, and the European market is currently attracting attention from these successful and well-known investors.

Whilst it might sound obvious to buy low and sell high, the human psyche makes it difficult to do in practice. The problem is that stock markets are usually cheap because countries or economies are beset with problems, and investors are paralysed into inaction by the entirely rational fear that the situation could get worse.

Nowhere is this more true today than Europe. 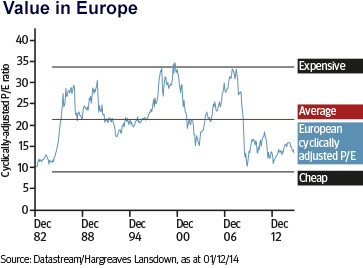 Read an explanation of P/E ratios

A company's P/E ratio measures how much investors are willing to pay for its earnings. It is calculated by dividing the value of a company's shares by its earnings. The blue line in the chart shows the cyclically-adjusted price/earnings ratio of the European stock market. The black lines use 'standard deviation' - a measure of how far away a variable is from its average - to show whether this P/E is historically high or low. These ratios should not be looked at in isolation. Other factors and investment risks should be considered.

It's easy to see why investors are pessimistic. Most euro zone members are grappling with deflation and slow economic growth, while underlying structural problems such as poor demographics, high debt levels and an inflexible labour market are yet to be resolved.

These problems are well-documented, and combined with ongoing political tension between the euro zone's core and its periphery, have depressed investor sentiment towards Europe to extraordinarily low levels.

Our preferred measure of valuation, the cyclically adjusted price-to-earnings ratio (see chart) suggests valuations today, on a relative measure, are lower than they were in the ERM crisis of 1992, during the Gulf War in 2003, and not notably higher than at the nadir of the global financial crisis. In these examples European stock markets went on to deliver good returns for investors. The current ratio is 13x compared with a long-term average of 21x. There are of course no guarantees and prices could still fall further.

A €1.1 trillion boost to European markets

ECB President Mario Draghi's announcement last month that from March the European Central Bank (ECB) will inject €60bn per month, an estimated €1.1 trillion in total, into the euro zone's troubled economy was warmly received by stock markets. This is roughly equivalent to the annual economic output of Spain, Europe's fourth largest economy.

Similar programmes in the UK and US have provided a longer term positive effect on stock markets, and the signs are positive that the effect in Europe will be similar. This could be good news for European investors for at least the duration of the programme (18 months, and longer if the ECB deems it necessary).

Diversified exposure to Europe in a single investment

Act by 5pm Wednesday to invest at launch

The economies of Europe have very different characteristics, and we feel it is an area in which our multi-manager approach could excel over the long term. Our new HL Multi-Manager European Fund will offer exposure to a multitude of countries, companies and fund management styles in a convenient one-stop-shop.

However, there are no guarantees and like all funds it can fall in value as well as rise so investors could lose money. The HL Multi-Manager funds are managed by our sister company Hargreaves Lansdown Fund managers.

Find out more, including how to invest at launch