Why reinvesting your dividends is so important

It’s a well-known story: an ancient Indian king offers a clever servant anything he desires. The servant requests a single grain of rice which he then places on the first square of a chess board. He asks the King to double it every day until the board is full; placing two grains on the second square, four on the third, eight on the fourth and so on until all the squares are filled.

Seeing what he thinks is a modest request the King agrees. Little did he know that the calculation for the number of grains on the chess board by the time the 64th square is filled is sufficiently large that even Microsoft Excel can’t deal with it.

When a company pays a dividend, investors have two options. They can take the money as income or reinvest it (either in the company or elsewhere in the stock market).

Consider the example below. Two investors each hold £100 worth of shares in the fictitious company Rice & Co., paying a 5% dividend. Assuming the shares do not change in value, after five years Investor A, who has chosen to take the income, will have received £25 of income and still have their £100 original shareholding, for a total return of £125. However, Investor B who has reinvested their income, will have £127.63.

The longer the shares are held for, the greater the difference becomes; so that after 40 years the total value of investor A’s shareholding plus all the income received is less than half that of Investor B’s shareholding.*

*This is an example only, dividends from stocks and shares are not guaranteed and the value of your investment can go down as well as up. These calculations do not account for charges or taxes.

This effect is called compounding, something Albert Einstein is said to have described as “the eighth wonder of the world ”, and is one of the reasons we always advocate a long run approach to investing. It’s also why dividends are often said to account for the majority of returns from the stock market over the long run.

Because the stock market tends to grow over time, the effect of compounding in the real world can be even more dramatic than in our example. £10,000 invested in the FTSE 100 30 years ago would have been worth £31,225 at the end of July this year if dividends had been taken as income, but had they been reinvested it would have been worth £96,569. Always remember however, that past performance is not a guide to future returns and the next 30 years will be different. The value of investments will fall as well as rise, so investors could get back less than they invest.

Value of £10,000 invested in the FTSE 100 - with and without dividend reinvestment 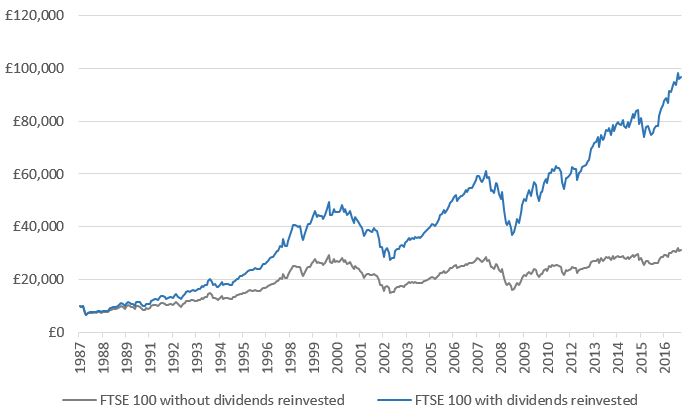 With those sorts of differences at stake it’s perhaps no surprise that Einstein is said to have gone on to describe compound growth as “the most powerful force in the universe”. In the stock market, that means reinvesting your dividends.

If you select automatic reinvestment in any Hargreaves Lansdown account, you will be charged a 1% dealing fee (subject to a minimum of £1 and maximum of £10).

Click here for our latest views on the dividend prospects of the UK stock market.

Open an easy-to-use, low-cost dealing account in under 5 minutes. Find out more

Why dividends are more important than you might think

EV/EBITDA – Another way to value companies

The most popular shares in January

What makes a trillion dollar company?

Why dividends are more important than you might think

Kicking off a series exploring the power of dividends, Equity Analyst Emilie Stevens starts with why dividends are more important than you may think.

EV/EBITDA – Another way to value companies

The most popular shares in January

Sophie Lund-Yates assesses some of the FTSE 100, FTSE 250 and overseas shares most popular with HL clients in January.

What makes a trillion dollar company?

Sophie Lund-Yates explores what investors can learn from some of the world’s biggest technology companies. She takes a look at Amazon, Alphabet, Microsoft and Apple shares.