How long will inflation stick around? Is there a recession looming? And just how different is this to the 70s? Here’s what we can learn from the past and what this all means for investors.

All information is correct as at 30 April 2022 unless otherwise stated.

With inflation higher than it has been in decades, people are increasingly asking whether we are heading back to the 1970s, a decade of sustained high inflation. The problem is that nobody really knows for sure. Uncertainty about the outlook is currently extremely elevated.

One thing we do know is that interest rates are very unlikely to rise to the levels that they did in the 70s. There is simply too much debt. The economy and particularly housing markets would enter a disinflationary bust long before interest rates rose into the double-digit territory seen in the 70s.

The bigger question is whether inflation will remain high beyond this year and whether a recession will ultimately be needed to get inflation back under control, as was the case in the 70s.

The differences and similarities between now and the 70s

There are some concerning similarities between the current economic environment and that of the 70s: low unemployment, energy and food price shocks, significant government spending and a long prior period of moderate inflation that arguably bred complacency about the potential for high inflation.

Source: BoE, Refinitiv Datastream, J.P. Morgan Asset Management. Inflation is headline consumer price index. Wage growth is average weekly earnings for the whole economy, based on total pay. Interest rate is the Bank of England base rate. Based on data available as of 6 May 2022.

The 70s was the last time that inflation was this high while unemployment was this low. Low unemployment gave workers bargaining power, which was exacerbated by the strength of the unions. This helped drive wages higher.

Then in 1972 there was a severe drought in the Soviet Union, causing food prices to spike. In 1973, OPEC announced an oil embargo targeting countries including the UK and US, which had supported Israel during the Yom Kippur War. Oil prices quadrupled.

The combination of low unemployment, strong unions and sharply rising inflation led to a wage-price spiral. Eventually, interest rates had to rise sharply and there was a recession.

However, unemployment didn’t rise that much.

Inflation and wages soon started to accelerate again and by the end of the 70s, when the Iranian revolution led to another sharp rise in oil prices, there was another wage-price spiral. Again, interest rates had to rise sharply to combat inflation.

Another deeper recession followed which drove unemployment up to over 10% by the early 80s. It was only then that inflation started to come under control.

As at the start of the 70s, unemployment is very low today. This is thanks to the extraordinary success of the furlough scheme. For those who weren’t furloughed, lockdowns forced them to spend less, boosting savings significantly.

With the easing of restrictions, people spending some of those savings has led to a remarkable economic rebound and with it a recovery in demand for workers. This has pushed both wages and inflation higher.

Also similar to the 70s, the war in Ukraine is leading to a significant increase in gas, electricity, oil and food prices, further boosting inflation. So, are we about to head into a wage-price spiral that forces the Bank of England (BoE) to sharply increase interest rates and cause a recession like in the 70s?

Is a recession on the horizon?

One rather gloomy reason why we may not get a wage-price spiral, is if the higher energy prices cause consumers to spend less on other things, companies have less money to pay them. Consumer confidence has already fallen sharply. If higher energy prices cause spending to decline significantly, it could even cause a recession in the next year without interest rates having to rise much further.

There are some key unknowns. Will workers, including in the public sector, get pay rises that fully offset higher prices? If not, do they have enough pandemic savings left to meet these higher costs? How much more government support will be provided to help consumers? How the chancellor responds will play a big part in determining the outcome.

But if a recession in the next year is avoided and unemployment stays very low, then the risk of a wage-price spiral rises. 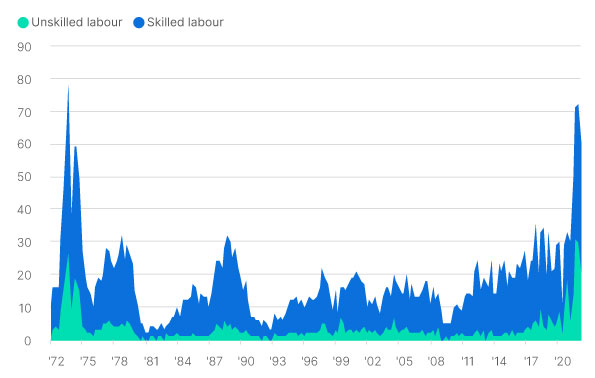 However, while there are similarities today with the 70s, there are also important differences:

Union membership is much lower than in the past. About half of UK employees were in a union in the 70s compared with less than a quarter today. However, with so much demand for workers relative to the available supply of them, wages could still rise meaningfully as companies feel they need to pay up to hold onto their employees.

It’s not clear that a wage-price spiral requires significant union involvement, particularly when job vacancies are as high as they are now.

The most convincing argument against a wage-price spiral is that the independent BoE will tighten monetary policy enough to prevent it. That’s as long as high energy prices don’t cause a recession on their own. Make no mistake about it, if the BoE are serious about preventing a wage-price spiral, they can do so by putting interest rates up enough.

The problem is that if prolonged high inflation is ultimately caused by workers having too much bargaining power, then central bankers and the chancellor might have to choose between higher unemployment or persistently above target inflation. Neither option would make them popular.

What does all this mean for investors?

Investors should accept that the outlook is currently particularly uncertain and make sure their portfolio is well diversified. Consider government bonds, unconstrained bond funds or other absolute return strategies, including macro strategies.

On the other hand, to try to shelter investments against a potential sustained period of high inflation, investors could also consider real assets, natural resources/commodities and value/income equity funds.

Mike Bell is a Global Market Strategist at J.P. Morgan Asset Management and is responsible for providing investors with independent economic views to help inform investment decisions. Hargreaves Lansdown may not share the views of the author.

Explore our Investment Times spring 2022 edition for more articles like this.

Please correct the following errors before you continue:

What did you think of this article?

Rising interest rates, inflation and a falling pound – what it means for you

What to expect from a selection of FTSE 100, FTSE 250 and selected other companies reporting next week.

Thinking of making your first investment? Here are some tips and ideas to help you get started.

Rising interest rates, inflation and a falling pound – what it means for you

With interest rates rising, inflation spiking and the pound falling, we look at what all this means for the economy, mortgages and investors, and what could be next.

What to expect from a selection of FTSE 100, FTSE 250 and selected other companies reporting next week.